Having back pain sucks.

Not knowing what is causing it, sucks even more.

That's why I wrote an article last week talking about a little known muscle called the QL and how it could be the cause of your back pain.

My goal was to help you understand that your back pain could be caused by the QL yet there is no way to accurately diagnose it using imaging (xray, MRI, ultrasound) techniques.

If you want to read it, you can check it out here: The Quadratus Lumborum Muscle

It's worse if you simply continue covering it up with Acetaminophen (aspirin) or other NSAIDs (Motrin, Celebrex, Advil, Aleve).

Seriously, do you know how bad this stuff is for your body?

It's horrible, and yet 23% of US adults regularly consume these products (1). Think about that for a minute.

One of out every Four Americans take these products weekly.

Even when taken at the recommended dosage… these substances have major side effects.

So let's get into them.

Overdosing with something as simple as aspirin is actually the leading cause for calls to poison control centers in the US (2). These tiny little white tablets cause more than 100,000 poison control instances, 56,000 visits to the ER and 458 deaths every year due to straight up liver failure.

How much is too much then?

Current guidelines recommend no more than 4,000 milligrams of aspirin daily.

Yet, according to a 2006 study published by the Journal of the American Medical Association, even just a small dose, taken for four or more days, caused elevated serum ALT, a marker of liver injury.

Making it worse, the elevations of this particular biomarker remained several days after the dose was discontinued (3). 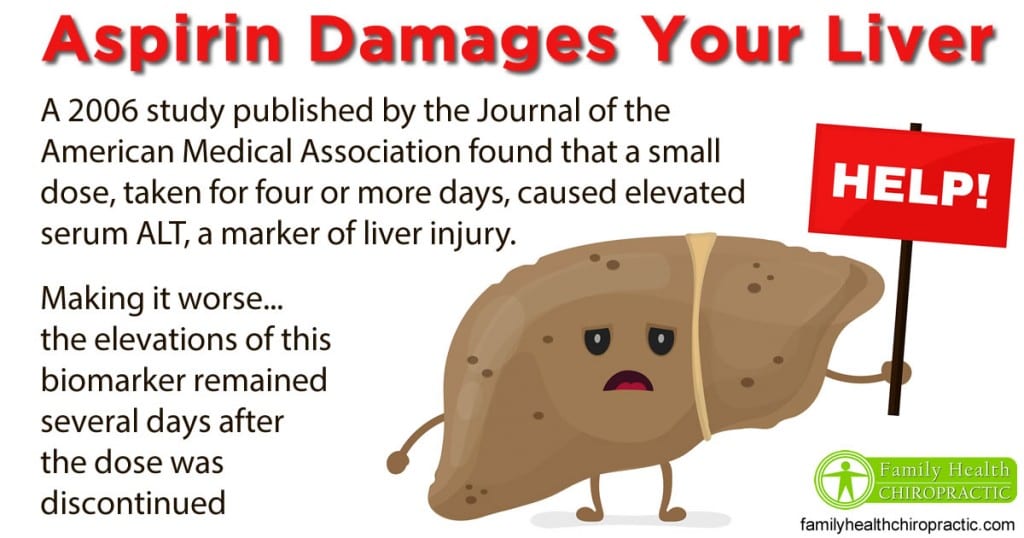 DANG! And this doesn't even consider people with pre-existing liver problems. Or what about the combination of other liver damaging substances such as alcohol, prescription medications and/or house hold cleaning products?

Recently it was determined that aspirin and NSAID use could impact our heart, kidneys and immune systems.

We've known for quite some time that heavy use of aspirin is associated with an increased risk for kidney disease.

This is especially true when combined with alcohol consumption. One study found that using aspirin and alcohol together, resulted in a 2.23 times increased risk for kidney dysfunction (5).

A 2013 meta-analysis of epidemiological studies found that acetaminophen was associated with a significantly increased risk of kidney cancer (6).

A 2011 study of more than 64,000 older men and women found that acetaminophen use was also associated with several different types of blood cancers, including myeloid neoplasms, non-Hodgkin lymphomas, and plasma cell disorders like multiple myeloma (7). 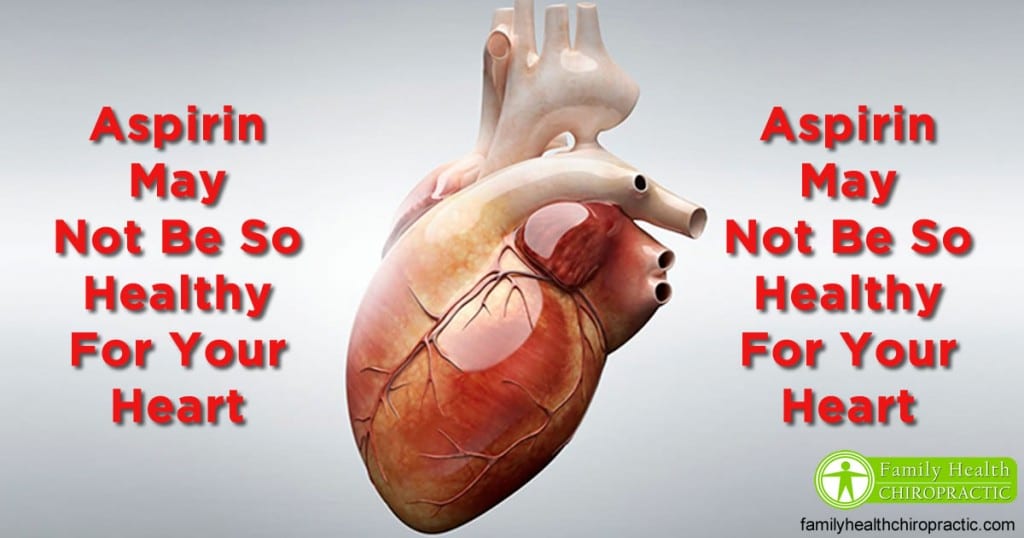 Hey Bro… That Pain Killer is Making You Soft

A link exists between NSAID drugs and hormone disruption which suppresses testosterone in males (8).

Ibuprofen induces a state of compensated hypogonadism within fourteen days of regular use (9).

In other worlds, ibuprofen quickly reduces the ability for the male body to produce the masculine hormone known as testosterone.

Astudy published in a 2017 medical journal documented an alarming 60 percent decline in the quality and quantity of human sperm over a 38-year period (1972-2011). Another study in 2011 showed that men who regularly used NSAIDs experienced close to a 30 percent risk of having erectile dysfunction

Most males consume these NSAIDs for the sake of musculoskeletal pain, primarily back pain and never think about the downstream ramifications.

Anyone paying attention to the news these days will understand what I'm about to say:

Researchers at Ohio State University asked whether or not aspirin could impact emotional processing.

What did they find?

In other words, both negative and positive stimuli were less “emotionally arousing” to people who had taken acetaminophen (10).

In yet another study, scientists asked people to rate their perceived pain, personal distress, and empathic concern after reading scenarios about another person’s physical or social pain.

People who had received acetaminophen beforehand showed less empathy towards others’ pain (11).

Shut the Front Door! What this means is that the concerns about the broader social side effects of pain killer consumption should be looked at. 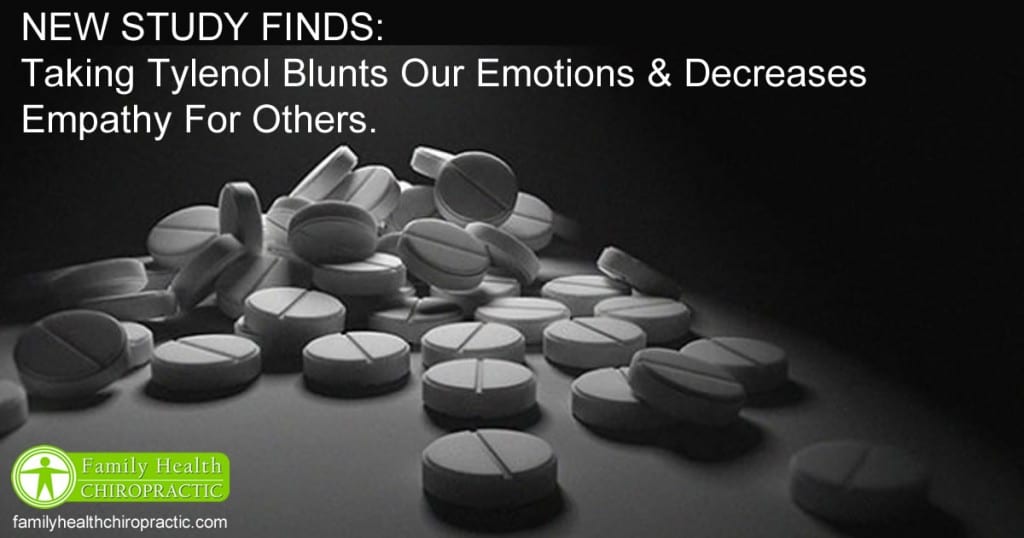 Especially if 1 out of every 4 Americans are currently using them every week. What kind of impact is this having on us as a society?

Aspirin, Moms and Their Babies

It's ridiculous to think that certain natural products on the market are not considered safe for mothers to consume, yet aspirin and other NSAIDs are currently marketed as safe during pregnancy.

What impact does aspirin consumption have on the neurodevelopmental stages of a fetus?

A 2016 study followed more than 2,000 mothers from the first trimester of pregnancy and performed several tests of behavior when the children were about five years old (12).

Forty percent of the children were exposed to acetaminophen in utero. Exposure to acetaminophen was associated with lower attention function and a greater risk for ADHD-like hyperactivity and impulsivity symptoms.

In boys, acetaminophen exposure was also related to a greater number of autism spectrum symptoms, and mothers who used acetaminophen more frequently had an even greater chance of having children with autistic-like behavior.

The authors even ran the data again, excluding mothers that had chronic illness, urinary tract infections, or fevers during pregnancy, and found the same results, suggesting that it was not illness itself that contributed to the association.

A study in rats found that acetaminophen causes toxicity to neurons even at concentrations too low to cause liver failure (13). It caused the neurons to undergo apoptosis, also known as programmed cell death.

So What Can You Do Instead?

First, I hope you understand why these substances are not good for you and you at least think twice about popping aspirin or any other NSAID for your pain.

Ultimately, pain is a sign of a deeper problem, and throwing pills at it is only suppressing symptoms.

Eating an anti-inflammatory diet, optimize your sleep, start working on flexibility, getting exposure to sunlight, and managing stress are all part of an effective pain-management strategy.

For acute relief, there are some alternative painkillers that are far less toxic and, in many cases, just as effective.

Here are a few that I always keep in my “medicine” cabinet: