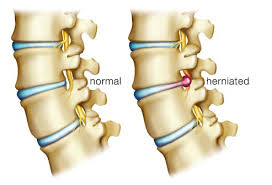 Discs act as cushions between the vertebrae in your spine.  They're composed of an outer layer of tough cartilage that surrounds softer cartilage in the center.  Discs can become herniated or they may become bulging.

A herniated disc is one in which pressure on an intervertebral disc pushes the disc beyond its natural boundaries, impinging on a nerve.  A herniated disc is almost always the result of the kind of compression that results from misalignment in the spine.

In the most extreme cases the disc may be ruptured, the nucleus is squeezed beyond the wall of the disc and leaks into the spinal canal.  This can be caused by traumatic injury and by bad posture.  Something as minor as bending to the side to pick up something can trigger a major episode.

Not all herniated discs cause pain and some appear to repair themselves on occasion.  The spine lengthens in some people during the course of a night’s sleep.  The disc is plumped up again while laying down due to an increase in the water content of the disc, which was compressed while standing up during the day.

A bulging disc extends outside the space it should normally occupy.  The bulge typically affects a large portion of the disc.  Bulging is usually considered part of the normal aging process of the disc or as a result of repetitive stress.

A herniated disc results when a crack in the tough outer layer of cartilage allows some of the softer inner cartilage to protrude out of the disk.  Herniated disks are also called ruptured disks or slipped disks.

The differences between the bulging and the herniated discs are sometimes confusing: Bulging discs are more common and will almost always resolve on their own.  Herniated discs can cause excruciating pain, but some cause no pain whatsoever.  Think of it this way: A bulging disc is like a sprained ankle; it may hurt, but probably won’t need surgery.  A herniated disc is like tearing a ligament when you sprain an ankle; it will probably hurt a lot more and in some cases may require surgery.

A ruptured disc is seen when the nucleus is squeezed beyond the wall of the disc and leaks into the spinal canal.  Something as minor as bending to the side to pick up something can trigger a major episode.

A desiccated disc has crumbled after becoming squeezed dry, flattened and brittle.

But how to treat these various disc maladies?

A lot of people swear by ice.  It can help numb the pain, but does nothing to improve healing potential.  There is even evidence to suggest that icing an injury can do more muscle damage!  Pain and fatigue actually increased after the cooling treatment.

Ice therapy can be effective in certain situations, however.  It does numb the tissue so it can help with pain.  It slows down metabolism so is good for open wounds or when trying to protect tissue.  The problem is that it won’t help to heal or increase the speed at which we heal.

Heat can stimulate circulation in an injured area, but it can also increase inflammation and increasing pain after the application.  Heat should only be used in more chronic conditions of muscle tension, as opposed to acute injuries.  Apply moist heat to the area of discomfort for fifteen-to-twenty minutes (never longer than thirty minutes).

Rotating ice therapy and heat therapy can be an effective use of heat.  It may increase circulation while reducing muscle tension.  Apply ice, then heat, then ice again, for five-to-seven minutes each.  Repeat every two hours.

Rest really doesn’t make sense.  Keep moving (especially by performing back extensions since most discs herniate backwards); move safely when you can, what you can.  Elevate your injuries when possible.  This helps to promote drainage and decrease the pressure around the injury. 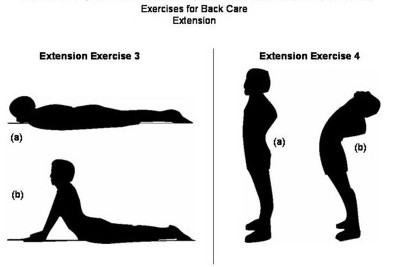 Discs are vulnerable to rupture, compression, herniation, and other painful conditions.  Good posture and proper stretching can help you avoid these common and potentially dangerous maladies.

We have successfully cared for and helped patients address back pain and other herniated disc symptoms.

At your initial appointment, we will go through your medical history, do a physical exam, and perform orthopaedic and neurological tests to make sure you're a good fit for our treatment.