“Look well to the spine, For the Cause of Disease.” – Hippocrates

Chiropractic care is now backed up by scientific research and literature. Every single time a chiropractic adjustment is performed, we are affecting the health of all internal organs in the body! Modern imaging and physiological measurements have revealed that chiropractic adjustments impact that hypothalamus (part of the brain controlling homeostasis) and the prefrontal cortex (part of the brain controlling behavior, personality and decision making). 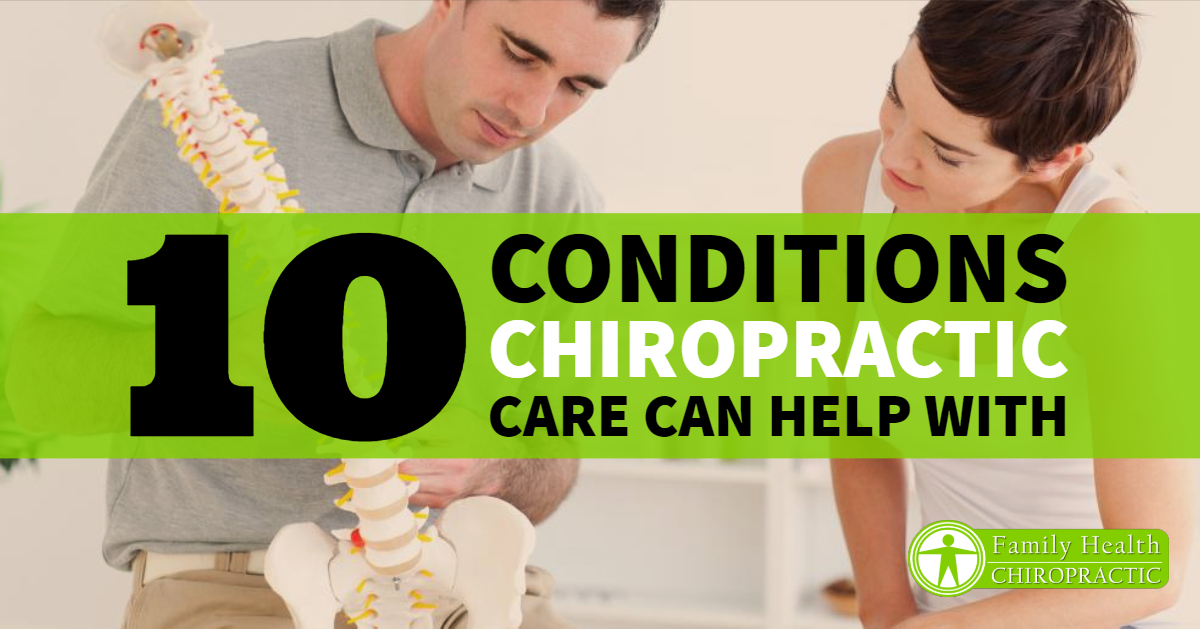 It's pretty clear that most people start searching for an Austin chiropractor when they experience neck or back pain. However, there is more scientific research supporting the benefits of chiropractic for those who are interested in taking a proactive approach to their health.

Most people would be surprised to hear that chiropractic care can influence our bodies in so many powerful ways including:

While all these benefits have been demonstrated in peer reviewed research, this article is going to be about the most common conditions that are clinically proven to get better with chiropractic care.

Sciatica is an intense, searing pain that starts deep in the muscles of the hips, triggering numbness and tingling down one leg.

Chiropractic adjustments are hands down the best, safest and most conservative treatments for back pain or pain that radiates from your glutes to your legs (ie Sciatica).

This study also compared chiropractic adjustments to the success rate of physical therapy (20% improvement) and corticosteroids (50%).

A randomized, double-blind study published in the Spine Journal compared active versus simulated chiropractic manipulations (placebo) on patients with sciatic nerve pain. The researchers found that those who received active manipulations recovered faster than those who were given placebo.

Active manipulations reduced the number of days patients experienced moderate or severe back pain and other sciatica symptoms, and also caused no reported adverse effects. (2)

Low Back Pain and Neck Pain

There are way too many studies to reference the success of chiropractic treatment for neck and back pain.

People who suffer from neck pain state that they are either “Very satisfied” or “Satisfied” with the chiropractic care. In fact, according to one study, over 98 percent said that they “Definitely would” or were “Very likely” to choose chiropractic care again if they experienced a similar problem. (3)

In a 2003 study published in the British Medical Journal, 183 patients with neck pain were randomly allocated to receive either manual therapy (spinal mobilization), physical therapy (mainly exercise) or general practitioner care (counseling, education and medications) over the course of a 52-week period.

It's interesting that most people don't think about seeing a chiropractor first. Especially when all the research indicates that chiropractic adjustments are more effective and cost less?

In a study funded by NIH’s National Center for Complementary and Alternative Medicine, researchers wanted to evaluate the effectiveness of different approaches for treating neck pain.

As a comparison, 33 percent of the people in the medication group reported decreased pain. After one year, approximately 53 percent of the two drug-free groups (chiropractic and exercise) continued to report at least a 75 percent reduction in pain, compared to an average of just 38 percent pain reduction among those who only took medication. (5) 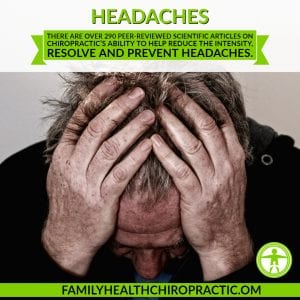 Second to back pain, headaches — whether its tension headaches or migraine headaches — are one of the most common conditions regularly managed by chiropractors.

At the time of writing this article, over 290 peer-reviewed articles referenced chiropractic’s ability to help reduce the intensity, resolve and prevent headaches in people all across the globe!

A group trial found that 22 percent of people who had chiropractic treatment saw the number of attacks drop by 90 percent. In that same study, 49 percent said they had a significant reduction in pain intensity. Compared to most medical treatments, few interventions can initiate headache relief naturally, without the risks of taking drugs long-term, like chiropractic adjustments can. (7) 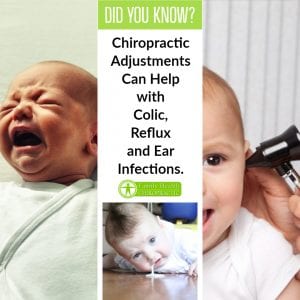 In the report the authors stated, “Our review revealed that chiropractic care is a viable alternative to the care of infantile colic and congruent with evidence-based practice, particularly when one considers that medical care options are no better than placebo or have been associated with adverse events.” (8)

Although very few randomized control trials have been conducted describing the clinical effects of chiropractic care on children, many case studies have been documented that describe how children suffering from ear infections and acid reflux have experienced complete to near-complete resolution after just a few visits with a chiropractor.

One study found that in children with acid reflux, “Notable improvement in the patient’s symptoms was observed within four visits and total resolution of symptoms within three months of care.” (9)

First, It's important to recognize that the primary treatment for ear infections is antibiotics.

A study from the 2010 Journal of Epidemiology showed that infants receiving two or more rounds of antibiotics in the first six months of life will have an 72 percent greater risk of developing asthma.

A 2010 study published in Journal of Epidemiology showed that children receiving more than 2 rounds of antibiotics within the first six months of life had a 72% greater risk of developing asthma! Dr. Daniel, DC CFMP FDN FCN Click to tweet

That said, when children were given chiropractic adjustments for ear infections, 93% of all episodes improved and 75% improved in ten days or fewer. 43% had improvement with only one or two treatments. This is another study that serves to show how chiropractic care may decrease the symptoms of ear infections in young children. (10)

In 2007, a study published in Human Journal of Hypertension showed that one upper cervical chiropractic adjustment has the same effect as two blood pressure-lowering medications!

Other studies have shown similar findings with hypotensive patients, and their low blood pressure was raised to normal levels after chiropractic care. This is exciting because it highlights the body’s ability to create a homeostatic balanced environment once spine misalignments  are removed. 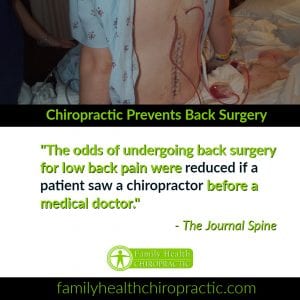 One of chiropractics primary goals is to help patients get out of pain and ultimately avoid any surgical procedures.

In fact, the Journal of the American Medical Association just recently published its low back pain guidelines and suggested that people suffering from back pain first try chiropractic before resorting to surgery.

In a study published by the journal Spine, researchers found that the odds of undergoing back surgery for low back pain were reduced if a patient saw a chiropractor before a medical doctor for treatment.

Frozen shoulder, also known as adhesive capsulitis, is the inability to move your shoulder – either because of extreme pain or tenderness.

A clinical study was recently published demonstrating positive changes and improvement of frozen shoulder while under chiropractic care.

Prior to treatment, the majority of patients reported an average of 9 out of 10 on a pain scale (with 10 being the most intense pain). After treatment, the median score dropped down to a 2. (13) 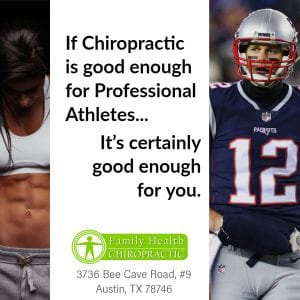 There's a good reason why almost every elite or high performing athlete has a chiropractor.

Because it is so effective at pain-based and pathological conditions, one of the most overlooked aspects of chiropractic care is that it enhances functionality in everyday life, and also athletic performance.

Studies have shown that when it comes to supporting recovery and improving physical performance, chiropractic is helpful because it:

Meanwhile, chiropractic can address sports injuries to areas of the body referenced above, including the lower back, shoulder, hips and more. “Chiropractic care can help with a multitude of sports injuries such as tendonitis, sprains, strains, back and neck pain. The goal is to help reduce inflammation, enhance joint function and reduce pain. It will also help improve range of motion, minimize recovery time, and maximize athletic performance.”

Chiropractic adjustments work by helping to place your body in the proper position which then allows the body to heal itself.

One of the key focuses of chiropractic care is realigning the spine and thereby reducing pressure placed on sensitive nerves, which can contribute to dysfunction of the central nervous system.

Chiropractic can be a complementary medical approach to mainstream medicine as well, and it’s been proven to be one of the safest approaches to naturally and holistically treating patients with a wide range of symptoms or conditions, including: back or neck pain, sciatica, scoliosis, frozen shoulder, acid reflux or digestive issues, headaches, high blood pressure, injuries and neuromusculoskeletal complaints that may require surgery.